How To Avoid A Climate Disaster review: Bill Gates’ Climate Plan for the Everyday Reader 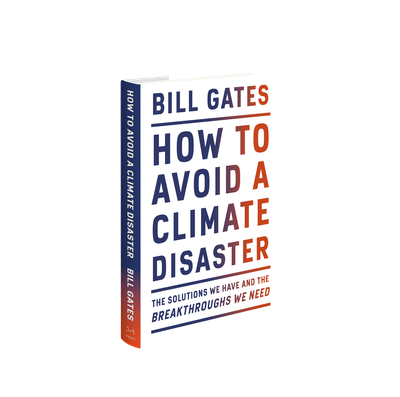 In How To Avoid A Climate Disaster, Bill Gates brings a fresh perspective to the climate change issue, spotlighting the transformative power of innovation and commercialization. Gates may be well known for Microsoft and his billions, but today he and his wife Melinda are arguably America’s most influential philanthropists. Although Gates is no climate scientist, he has spent a decade studying climate change along with his other focuses of disease, education, and poverty. Gates presents a clear-eyed, succinct view of the climate problem and what he believes is the best path forward. The book is structured in a very utilitarian manner, reflecting Gates’ technical expertise. Gates’ geeky tone and simplistic word choice make his book a comfortable read. But although Gates gets full points for his down-to-earth explanations of exciting technologies, he misses the mark a bit when it comes to politics.

Book Overview
Gates gets straight down to the facts starting with the first chapter, “Why Zero.” As the name suggests, “Why Zero” is all about the ins-and-outs of climate change and why we are currently headed towards climate catastrophe. He tells us to remember two numbers: 51 billion, and zero. The former is the typical amount of greenhouse gases, in tonnes, that the world adds to the atmosphere each year. Zero is “what we need to aim for.” But reality is harsh, as Gates acknowledges: “[v]irtually every activity in modern life – growing things, making things, getting around from place to place – involves releasing greenhouse gases.”

To help us navigate the eye-catching headlines that follow climate change developments, Gates gives us a few benchmarks to evaluate a solution or technology: how much does it cost, what percent of global emissions will it reduce, how much space does it require, and does it address less-known sources of emissions? Additionally, if the solution is related to electricity generation, how much can it power?

Instead of leaving us with just the numbers, Gates constantly puts figures into scale. He explains that 1 gigawatt can power a mid-size city; that surprisingly, manufacturing contributes the most emissions globally; how a reduction of 17 million tons of carbon is barely 0.03 percent of annual global emissions; and that Green Premiums are the most important factor to determine if a technology can be commercialized economically.

Next, Gates dives right into the five main emission categories, from most damaging to least. The pages are full of technologies that Gates finds promising, but he always keeps his sense of realism; some of these technologies are either too expensive or too inefficient to deploy on an impactful scale, for now. Gates believes that funding these technologies to lower the price gap between clean and dirty (fossil fuel) methods is crucial.

The final four chapters go as follows: how the poor are disproportionately affected by climate change, how government policy can facilitate transitions, a general plan to get to zero, and what each of us can do. Gates also appends a small afterword about COVID-19’s effect on climate change efforts.

Praise and Concern
Although Gates may seem overly fixated on technology, for the most part his book covers all of the facets necessary for a climate revolution, from R&D funding to offshore wind farms. The book is full of comprehensive and clear diagrams, as well as fun pictures and stories. My favorite anecdote is about young Gates’ time in the Boy Scouts. All of the kids in his troop would always clamber to ride home with his dad because he would treat everyone to burgers. Gates speaks for most Americans when he remarks that meat will not be leaving our diets anytime soon.

However, the book has two glaring gaps. First, Gates walks around the issue of entrenched fossil fuel companies and their powerful lobbying. He proclaims that he “think[s] more like an engineer than a political scientist,” and he says, “I don’t have a solution to the politics of climate change.” Yet you cannot blame him for these shortcomings; he clearly states that his purpose is to detail the technological breakthroughs necessary for a climate revolution, thus sidelining other facets such as political barricades.

Second, Gates practically ignores the fact that nations have historically been unwilling to cooperate on climate change. Although developed Western countries like to point fingers at authoritarian governments who put sovereignty above climate proposals, the US and many others in the Western bloc suffer from powerful fossil fuel lobbies that put their corporate interests above the common good.

In summary, Gates’ book should be on everyone’s nonfiction reading list. He does a tremendous job of explaining the most important facts and figures, culminating in a convincing plan for zero emissions by 2050. Although I am doubtful that this book will turn over the most extreme climate deniers, it certainly should clear up any climate doubts that ordinary people have. How To Avoid a Climate Disaster is an excellent and enjoyable read from one of our favorite geeks.