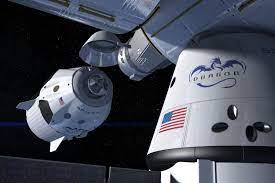 On November 15th, as people still debated over the recent election, a thin white needle lifted off our planet using 1.7 million pounds of thrust. On top of that needle was a tiny, sleek capsule (named “Resilience”) packed with four astronauts and the gear they needed to survive and complete their mission.

The historic launch of the SpaceX Crew-1 mission marks the beginning of a new era of inexpensive spaceflight and American resurgence into the cosmos. The crew, consisting of three Americans and one Japanese astronaut, spent about 27 hours in the capsule before arriving at the International Space Station (ISS).

The ISS has been around for over 22 years, as well as routine flights to resupply it with new astronauts and equipment. So what makes this launch special? Well, after NASA discontinued the Space Shuttle program in 2011, the only option American astronauts had to reach the ISS was onboard Russian Soyuz rockets. From 2011 to 2019, NASA had spent over $3.9 billion  to purchase a total of 70 seats on Soyuz rockets. The Crew-1 launch marks the end of dependence on the Russians to get to space. For the country, this is a momentous national achievement.

SpaceX has received over $3 billion from NASA for the development of the Dragon capsule, and Boeing has received almost $5 billion  to create the Starliner. Both capsules are designed to hold up to seven astronauts. These investments will surely pay off as the two companies finalize their spacecraft, with SpaceX clearly in the lead. The Crew Dragon capsule and its accompanying Falcon 9 rocket are packed with futuristic technology, from autonomous booster stage landing to sci-fi-reminiscent blue LCD touchscreens.

But ISS missions are just one part of SpaceX’s grand ambitions. The company has a concrete goal to establish an independent human colony on Mars. Right now, SpaceX is actively developing the Starship, a massive new spacecraft that could potentially carry 100 crewmates at a time to destinations across the solar system. Starship will be able to reach destinations across the solar system and will pave the way for future interstellar travel.

SpaceX’s success demonstrates the importance of government cooperation with the private sector. Government funding, coupled with private sector innovation, will ensure that the United States can bring its liberal legacy into the vast expanses of space. As SpaceX founder Elon Musk famously stated, “I can’t think of anything more exciting than going out there and being among the stars.”

One last thing: look forward to Tom Cruise boarding Crew Dragon for the ISS in late 2021 to film a still-untitled, NASA-backed action movie.