Can Presidents Debate Better than High-Schoolers? 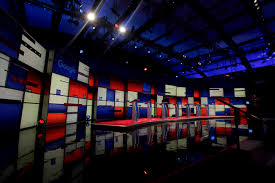 Every year over 200,000 high school students compete in speech and debate tournaments, with only 4% of those students advancing to the intense national competitions. These young debaters spend hours upon days upon weeks perfecting their techniques and prepping their materials, aspects of the debate work that professionals often let slide.

Prior to this presidential election, President Trump and President-Elect Biden participated in a heated first debate, unprecedented separate public forums, and a slightly more refined final debate, facing scrutiny from the press after each event. Therefore, the question stands; who’s better at debating, high school students or presidential candidates?

The National Speech and Debate Association generally offers four main styles of debate for students: public forum, policy, congressional, and Lincoln-Douglas. Public forum and policy debates tend to be the most popular debate format both for their relatively simple format and focus on one topic or question, and the opportunities they present to work with a team of two and gain feedback. In NSDA policy debates, students are presented with a single policy or subject and given eight minutes to deliver their opening speeches. After each student opens, they are allowed three minutes to cross-examine each others’ arguments. Then a five-minute rebuttal round begins. Since each student must argue both the affirmative and negative sides of the policy, the debate can last up to three rounds.

Presidential candidates follow a debate-style similar to policy debates but on a broader and less focused scale. Candidates for both the president and vice president are asked questions in six to nine different segments ranging between ten to fifteen minutes long. Rather than presenting a long opening statement, each candidate takes two minutes to respond to each moderator’s question. Rather than a five-minute rebuttal, each candidate spends one to two minutes responding to each other. Moderators inform both policy and presidential debaters of topics before their debates, and both students and presidential candidates are allowed to prepare materials and take notes before and throughout the debate.

Although presidential debates directly focus on more poignant and impactful topics affecting America, many debate experts noticed a change in this year’s debate mannerisms and attitudes, affecting how these presidential candidates would have been judged if the event was associated with NSDA. Students must follow a strict set of rules restricting interruptions, plagiarism, and false information. The NSDA encourages students to live by their Code of Honor; Integrity, Humility, Respect, Leadership, and Service, as the students progress through the National Debate ranks. Meanwhile, presidential candidates have no set limitations regarding information they present or any penalties against interruptions or talking after their time has been called. Candidates are expected to present relevant and correct information and treat their opponent with the utmost respect. However, in the first presidential debate, this very obviously was not the case.

Following the first presidential election, President-Elect Biden and President Trump faced extensive criticism over their questionable and highly unprofessional debate tactics. Both President-Elect Biden and President Trump strayed from presenting relevant information in favor of addressing one another’s personal lives. They interrupted and talked over the other, broke passive demeanor by shouting both at the moderator and their opponent at times, and consistently ran over their allotted times.

Vice President Pence and Vice President-Elect Harris delivered a more composed, if slightly passive-aggressive, debate. They focused on explaining their party’s stances on subjects such as climate change, healthcare, and COVID-19 with little interruptions, no personal attacks, and few overruns in time. In the second and final presidential debate, the Commission on Presidential Debates utilized a mute function on each candidate’s microphone in order to restrict false information, interruptions, and personal attacks during the nationally televised event.

Throughout this presidential election, Americans have witnessed the development of both the Presidential and Vice Presidential candidates in terms of both policies and attitudes towards the election and each other. This development of attitudes is quite prevalent in the change seen in both President-Elect Biden and President Trump from the first debate to the last. Nevertheless, if any of the candidates on the election ballot this year were judged by a highschool debate moderator, serious points would be deducted for misconduct towards an opponent, potential discreditable information, and failure to properly use the time allotted.