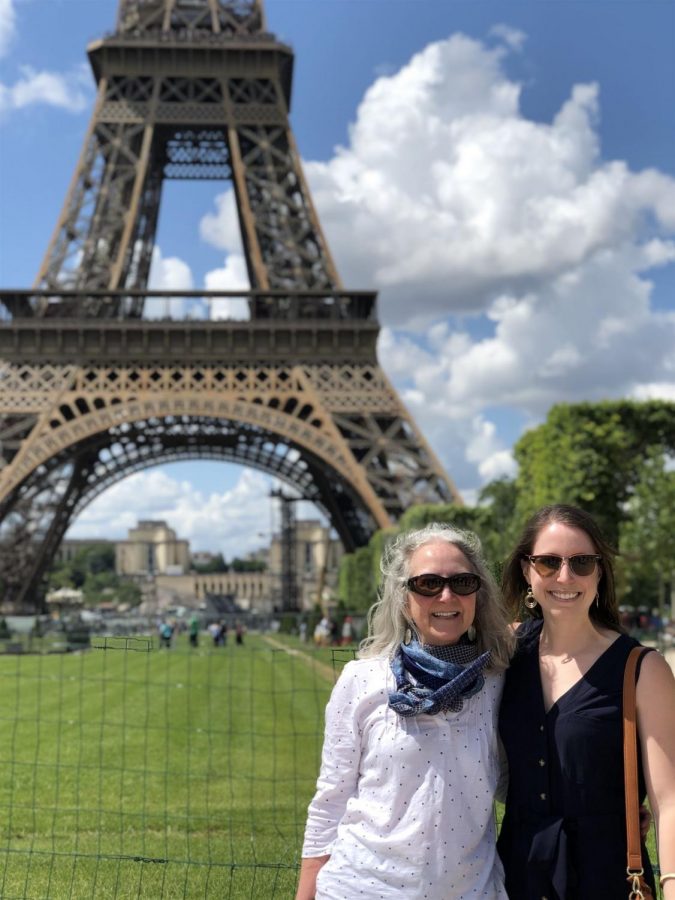 A photo of Mrs. Katie Eissler-Thiel and Madame Cooper in front of the Tour Effiel during the 2020 French Summer Exchange Program

Mrs. Katie Eissler-Thiel has been announced as Archmere’s next principal and will succeed Mr. John Jordan in July 2020. Thiel – fondly known as Madame – has been an Archmere French teacher since 2014 and is well known in the community for her dynamic, inclusive personality both inside and outside  the classroom.

Thiel identifies her core values of promoting education and cultivating a strong community as catalysts for her decision to apply. Mme. Thiel described her decision to apply as a natural next step in her career at Archmere; she said, “I have a lot of energy to give at this juncture in my life, and I felt in my heart and my gut that I have more to give beyond my schedule in the classroom.”

Though she acknowledges that she is heavy-hearted about relinquishing a portion of her time in the classroom, she values teaching and knows she will undoubtedly continue her teaching role at Archmere in the future. When asked about her motivation to apply, she commended Mr. Jordan and his role in establishing a positive culture and sense of community; she continued by saying, “I thought, ‘wouldn’t it be nice to know that we can preserve the sense of community with someone who has already been here and already understands the way things work?’”

The selection process consisted of multiple rounds of interviews in which Mme. Thiel met with the hiring committee, all major academic departments, and various constituent groups regarding her goals for Archmere. In reflecting on the meetings, Mme. Thiel said she felt “invigorated” by the long process: “It was great to be pushed on so many diverse topics, and I enjoyed my conversations with parents and students, you know, groups I don’t get a chance to interact with quite as much. It was nice to get a finger on the pulse on what their concerns are and what things they are hoping to see change.”

Archmere’s future is headed to success with Mme. Thiel’s clear goals she will strive to accomplish as principal. From her experience as a teacher, Mme. Thiel stated that, “working closely with teachers is something I am excited to do… My goal is to go in and see every single teacher at Archmere in the first semester.” In doing this, she hopes to establish a close relationship with teachers to help them navigate potential struggles in the classroom. In doing so, Mme. Thiel seeks to remove the stigma around principal observations “catching” teaching mistakes, instead promoting togetherness. As Mme. said, “We are all in this together to create a culture.”

Mme. Thiel also has innovative ideas and methods to further develop Archmere’s community spirit. “I really want to make sure that we are maximizing our White Day time together,” she said. “I think that’s such a special community time, and I want to make sure we are using it to our advantage.” During White Day assemblies, Mme. expresses hope to offer professional speakers, engage alumni and parents, and also allow students the opportunity to speak about their passions beyond the classroom. As principal, she hopes to engage students with an element of choice during White Day assemblies, in which they can select a topic they are genuinely interested in pursuing in the future.

Mme. Thiel also intends to secure the details of Winterim, a new intersession in January dedicated to specialized programs. According to Mme., improving the students’ experience in the years to come can be solidified by heavily analyzing the existing program, such as through a comprehensive survey.

For many students and faculty, the selection of Archmere’s first female principal signifies exciting changes in leadership and energy. Mme. Thiel believes in the importance of female leadership, which partly influenced her decision to apply for principal. Mme. Thiel hopes that the investment in female students and faculty can, in turn, improve the strength of the community. Part of her plans include hosting conferences dedicated to women associated with Archmere and beyond to benefit females of all ages in the local area. She excitedly said, “I really want to organize a female empowerment conference… We have so many wonderful moms who have incredible careers to speak to, and I would love to engage some local figures or invite other young girls from the region.” In addition, she hopes her role as principal fosters an even more inclusive community and inspires girls to run for leadership positions, like in Student Council or club boards.

Perhaps the Archmere community can benefit just as much from learning about Madame’s life outside the classroom, where her excitement shines as clearly as in the classroom. When prompted, “What is one thing nobody from Archmere knows about you?”, Madame responded that she was an avid soccer player in high school and was, in fact, voted a finalist for most athletic in her high school yearbook. Her French studies have also taken her internationally to France, where she lived while studying in Avignon and working at the Université of Caen in Normandy. Now, her days working at Archmere are filled with various adventures. In her free time, Madame loves attending concerts; interestingly enough, she sees many of these Indie-style concerts with teachers Mr. Klinge, Mr. Seltzer, and Mr. Mengers. Take a trip to Philadelphia’s Bibou, a French restaurant dedicated to creative dishes, and you might find Madame eating her favorite Foie Gras dish. To try to emulate Madame’s school-famous wardrobe, drive up to Lila in Manayunk, PA for trendy, high end, and of course, sustainable thrifting.

Mme. Thiel will undoubtedly make her mark on Archmere in her role as principal. Her love for Archmere is great, and she credits the spirit of community for the school’s continued success. Mme. firmly believes that “without a good community, you cannot have good academics… or this vibrant, social, and extracurricular realm. It all comes back to the community.” And, when asked the incredibly hard question of what her favorite aspect of Archmere is, Madame Thiel responded that the aspect of Archmere she values most in the close-knit community. She explains by saying, “I just, even last night [when principal decision came out], like I get teary thinking about it; my inboxes were filled with messages from people I haven’t talked to in years who had reached back out. That is just so special, and I think to myself… how lucky to be surrounded by such competent people.”